Saudi women are going to college, running for office and changing the conservative country

Saudi Arabia is a notoriously difficult place to be a woman.

The kingdom enforces a strict interpretation of Islamic law that sees the separation of men and women as a defining aspect of an Islamic society. It also puts men in charge of their female relatives. Under this “guardianship system,” as it’s known, Saudi women must get permission from male chaperones to travel, study and marry. Domestic abuse is difficult to report and rarely punished.

In recent months, international news outlets have featured the harrowing tales of teenage Saudi girls who flee their families to seek asylum abroad. They’ve told stories of women’s rights activists arrested and jailed for “undermining the security” of Saudi Arabia.

Such stories highlight the repression that restricts life for women in this conservative country of 33 million.

What is often lost in news coverage of Saudi Arabia, I find, is that Saudi women are much more than mere victims.

As a researcher who studies women’s movements across the Middle East, I have learned that Saudi women – like any large population – are a diverse group with different opinions and experiences. They attend school, work as journalists and teachers, scuba dive, meet friends for coffee – and, increasingly, defy the law to expand women’s rights.

The fight for gender equality

For decades before Saudi Arabia ended its ban on female drivers in 2018, the country’s women fought for the right to drive cars. Several activists were arrested just weeks before the ban was lifted after very publicly getting behind the wheel. 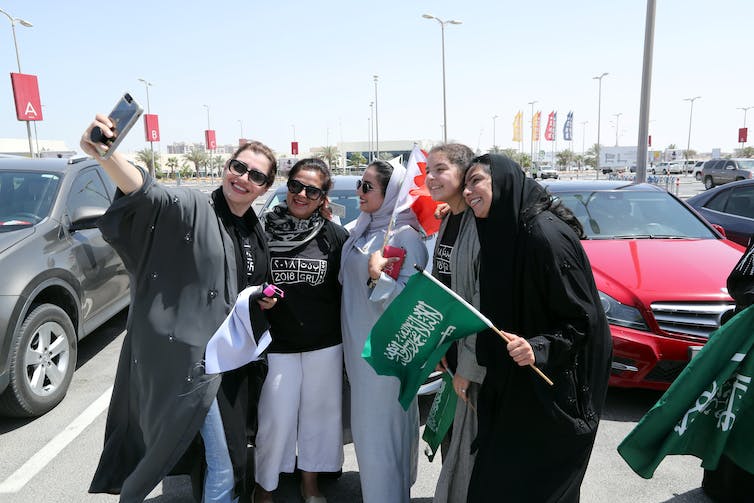 Saudi women even make the most of laws forbidding men and women from mixing in public places, I’ve found.

In the private, women-only areas of malls, parks, restaurants, schools and coffee shops, women feel free to express their independence. They remove their abayas – the long black robes all Saudi women must wear – and talk openly, without men regulating their behavior.

Some women have even called for more gender-segregated places to give women more breathing room in this patriarchal society.

Saudi women have been attending university since the 1970s, but their educational opportunities have grown markedly over the past 15 years.

A government-funded study-abroad program launched in 2005 sends tens of thousands of young Saudi women to the United States, United Kingdom, Canada and many other countries each year.

In 2015, Saudi women’s undergraduate enrollment rates actually surpassed those of men, with women comprising 52 percent of all university students in the kingdom, according to the Saudi Ministry of Education.

Employment rates have not followed these educational trends.

Only 22 percent of Saudi women worked outside the home in 2016, compared to 78 percent of the male population, according to the World Bank.

Still, women can – and do – work in nearly all of the same fields as men, with the exception of “dangerous” fields like construction or garbage collection. Since Islamic law permits women to own and manage their own property, ever more Saudi women see employment as the path to financial independence.

There are female Saudi journalists, like Weam Al Dakheel, who in 2016 became the first female TV presenter to host morning news in Saudi Arabia.

There are female Saudi lawyers, like Nasreen Alissa, one of only a few women to run a law firm in Saudi Arabia and the inventor of the “Know Your Rights” app.

And there are lots of Saudi women teachers. Just over half of all teachers in Saudi Arabia are female, according to the Organization for Economic Cooperation and Development. Saudi women also make up almost half of the kingdom’s retail workers. 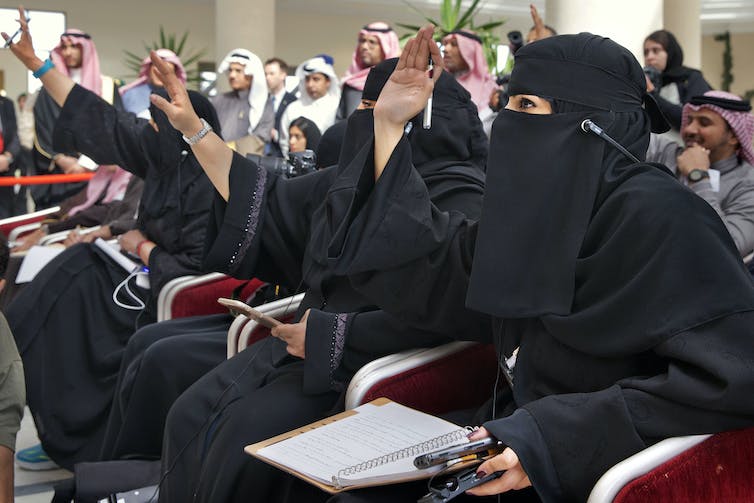 The Saudi government is working to get more women in the workforce and has set a goal of a 30 percent female labor participation rate by 2030. Though gender-mixing is often prohibited in the workplace, women are a key component of the kingdom’s ongoing “Saudization” efforts to replace non-Saudi workers with a local workforce.

Saudi Arabia began slowly expanding the rights of women after the Sept. 11, 2001 World Trade Center attacks, part of a rebranding effort to counter negative views of the country as a breeding ground for terrorism and religious fundamentalism.

Women have made particular progress in politics in recent years.

In a series of firsts, women were appointed as deputy education minister in 2009, advisers to the king in 2010 and ambassador to the United States in 2019.

In 2015, Saudi women were given the right to vote and to run in municipal elections. Nearly 1,000 women campaigned for seats on local councils, comprising 14 percent of the total candidate pool.

Saudi Arabia’s first crop of female candidates struggled to convince voters, just 9 percent of whom are women, to elect them. Today they hold just 20 of Saudi Arabia’s 2,000 local council seats.

In patriarchal Saudi Arabia, the women elected face significant barriers to performing even the limited duties of their office, which include overseeing garbage collection and issuing building permits. Some must even attend council meetings via video conference to avoid being in the same room as men.

These challenges have not stopped Saudi women from working – both within and outside of the political system – to change the country they call home.

“I was never but a good citizen that loved her country, a loving daughter and a hardworking student and a devoted worker,” wrote the Saudi activist Nouf Abdulaziz in a letter posted online after her arrest in June 2018.

Even facing jail, she “wished the best for” Saudi Arabia.