Every train car in “La Bestia” – The Beast – is a world unto itself, with all the good and evil that entails. Ariel saw the worst of this world when he witnessed, helplessly, as eight people raped one of his fellow train passengers, a young girl, in July 2019.

Ariel – not his real name – had nearly arrived at Altar, in the northern Mexican state of Sonora, after a long journey. La Bestia is the freight train migrants use to get from southern Mexico to the U.S. border when they can’t afford a bus ticket or a smuggler and they want to avoid the immigration checkpoints of “la migra.”

It is a violent way to travel. According a study published last year, one out of every four migrants who traveled across Mexico between 2009 and 2015 suffered physical violence. The violence ranges from street assaults, beatings with wooden boards by cartel enforcers – a punishment known as a “tableado” – to extortion at gunpoint. Others disappear in the desert.

Ariel was anxious and distressed arriving to the migrant shelter in Altar where I met him last summer. He said he felt guilty for not helping the girl who was raped, but he was afraid of being thrown off the train or even murdered by her attackers. A fall from the train can mean death too, or injury and mutilation.

I spent weeks talking to migrants like Ariel who had reached this point of their journey during my sociological field research in two northern Mexican towns in Sonora state: Altar, a village of about 8,000; and nearby Caborca, a sizable city of about 100,000. Many, but not all, of them were Central American.

The United States may be in sight from these border towns, but the trip is far from over. That’s because passage from Sonora to the border is entirely controlled by organized crime.

Regional buses don’t stop in Altar anymore, and local taxi drivers usually won’t make the 60-mile trip to the Arizona border because local gangs have threatened them, even burned their vehicles.

So once a migrant arrives in Altar, he’s not leaving without paying a fee – usually somewhere between US$4,000 and $8,000. That’s a stratospheric sum for migrants, who might earn $150 to $300 a month back home.

Those who cannot pay the price may be able to earn their passage by “taking a backpack” – transporting drugs.

Backpacking is not free, I was told: Migrants may pay gangs up to $100 for the right to smuggle a backpack of contraband. And one backpacking trip as a “donkey” may not suffice. To earn the right to stay in the U.S., these migrants reported, they may have to make several trips.

Young migrants with no money, no plan and no U.S. connections to help them across the border are usually used by organized crime as “dots” – lookouts. The “dots,” kids as young as 12 to 17 years, act as the eyes and ears of organized crime in Altar. They are stationed at the local bus stop to report all departures and arrivals.

In the maps that migrants make in workshops organized by the psychologist of the Community Center for Attention to Migrants and the Needy, Altar appears both as the end of a long road and as the beginning of a new one to the United States.

Practically all of the women and children I met at Mexico’s northern border arrived in one of the caravans that began forming in 2018 to help migrants from El Salvador, Nicaragua, Honduras and Guatemala travel more safely.

But some women do take the dreaded La Bestia train. The journey, already dangerous, is much riskier for them.

Sexual assault is the almost inevitable fate of women on La Bestia. Many women take contraceptives, assuming that they will be raped, according to psychologists at the Altar Community Center. Others say they avoided cleaning themselves when they get their periods on the train, hoping the smell of menstrual blood would make them repugnant to attackers.

I spotted a girl I’ll call Karina on the edge of the train tracks in Caborca. She was traveling with a man. When I asked if he was her boyfriend, she answered, “He is my train boyfriend.”

Several of the young girls who rode La Bestia told us they met guys on the trip who’ve became their “boyfriends.” This, I realized, is a form of self-protection: At least this way they have sex with only one person.

Women traveling with children nearly all arrived at the U.S.-Mexico border in migrant caravans. They are generally concentrated in the bigger border cities like Nogales, Tijuana and Matamoros.

That’s where they must wait for their asylum applications to be processed in the United States due to a Trump administration policy called “Remain in Mexico,” launched with the agreement of the Mexican government in January 2019.

In Nogales, in Sonora state, a few blocks from the border, I met a migrant I’ll call María, who comes from the southern Mexican state of Guerrero. She’s been waiting for three months with her two children, ages three and five, she says. Maria is number 2088 on “the list,” a queue of thousands of asylum-seekers self-managed by the migrants themselves.

Almost none will be welcomed back into the United States. On average, 85% of Central American and Mexican asylum applications were rejected last year.

Migrants may be poor, but they are good business in northern Mexico.

Some villagers even charge migrants between 200 and 600 Mexican pesos – about $10 to $30 – to access money sent by their relatives via Western Union and other money transfer services. As undocumented migrants, they lack ID to withdraw funds.

In the decade since the North American Free Trade Agreement – now known as USMCA – came into effect, export agriculture has developed in Sonora. Formerly, these jobs were filled by day laborers from southern Mexico, who would come north for the harvest seasons to pick the grapes, nuts, potatoes, cucumbers and asparagus sold in U.S. supermarkets.

Now, vans cruise migrant shelters, guest houses and the train tracks of La Bestia migrants looking for workers to take out to the ranches of the Mexican countryside.

The daily wage for these gigs sounds appealing: Temporary farm workers are supposed to be about 200 Mexican pesos – about $10 – to work from Monday to Saturday, 6 a.m. to 1 or 2 p.m.

But agricultural workers are charged to cash their paycheck, and the cost of all food consumed during working hours is deducted from their pay. Many complain that their employers never paid them or paid them much less than agreed.

For one 17-year-old Honduran I met on the train tracks in Caborca, who was a farmer back home, it was worth it.

“The coffee you drink at Starbucks is what I used to grow for less than $7 a day,” he said.

Even in the midst of such dehumanizing circumstances, I saw hope in some migrants’ small daily practices. 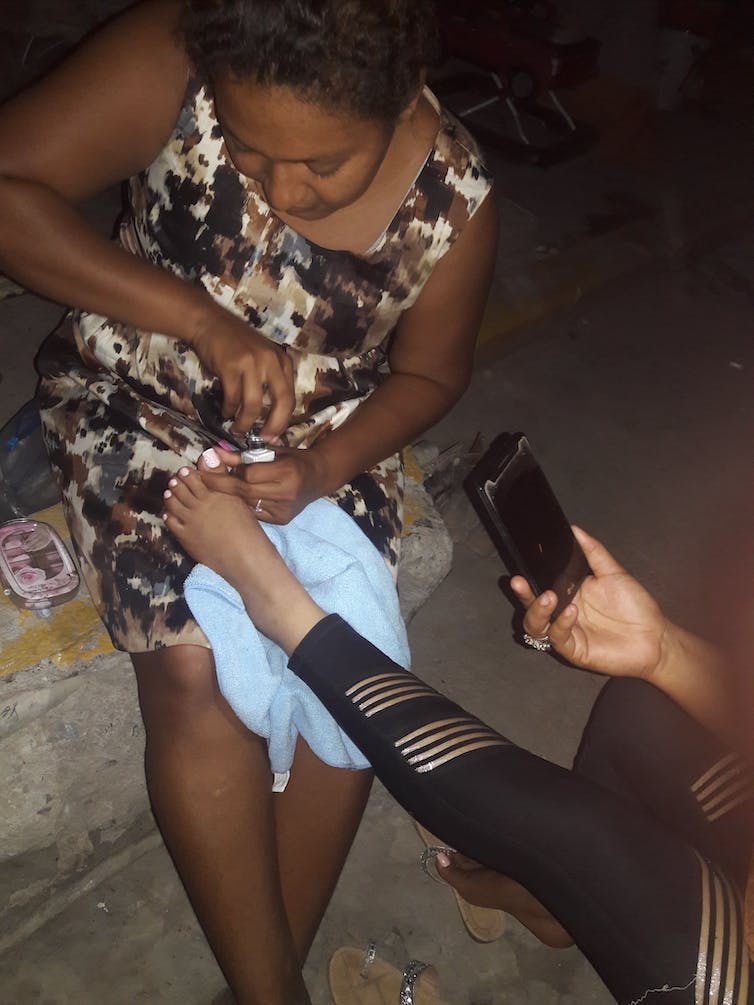 A Central American woman works in a “beauty center” she set between two chairs despite the overcrowding and filth of the refugee camp in Matamoros, giving pedicures to earn a living while waiting for her number to come up on “la lista.”

Other women and men, in retelling their migration experiences during workshops at a shelter in Altar, recognized their own capacity to survive, to resist, to keep on living.

This article was written with the collaboration of Laura Carrazco, a psychologist at the Community Center for Migrant Assistance in Altar, Sonora.

The conspicuous absence of women in India’s labour force